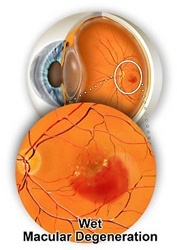 Age related macular degeneration (AMD) is the leading cause of legal blindness in the elderly Caucasian population, but is relatively rare in other races. The degenerative condition of the central retina (macula) only affects central vision, leaving peripheral vision intact. AMD affects approximately 30% or more of the Caucasian population age 75 and greater and, while no one knows the exact cause of this disorder, a genetic link has been made. The primary lesion appears to occur deep to the central retina with deposits known as drusen. Drusen are thought to be metabolic by-products, the increasing deposition of which may further interfere with the high metabolic activity of the macula.

Risk factors for vision loss with AMD include advancing age, hyperopia (farsightedness), family history of AMD, exposure to ultraviolet (UV) light, smoking, and high blood pressure. Nutritional factors may also play a role, and will be discussed in further detail below under “Protection against AMD”.

There are two basic forms of AMD: “dry” AMD and “wet” AMD. The latter of these is the more visually debilitating form. These are discussed in further detail below.

The deposition of drusen typically begins in the middle-age and progressively worsens over a period of many years, perhaps several decades. This is associated with increasing macular destruction and gradual reduction in central vision. “Dry” AMD accounts for 90% of cases and, fortunately, does not usually cause total loss of reading vision. Patients with this form of AMD must be monitored quite closely, as the condition may deteriorate into “wet” AMD.

The “wet” form of AMD accounts for only 10% of all cases, and is more visually debilitating. This form of the disease occurs when a tiny frond of vessels (capillaries) breaks through a layer of the retina known as Bruch’s membrane, and grows beneath the macula. This is known as a choroidal neovascular membrane (CNVM). The abnormal vessels of the CNVM may leak fluid causing a localised swelling, or worse, result in a localised bleed. This is the condition most likely to result in legal blindness. It is important to realise, however, that even “wet” AMD doesn’t lead to “cane blindness,” given that peripheral vision remains intact.

The diagnosis of “dry” AMD is made on clinical findings alone, that is, by examination of the retina using specialised equipment. When an ophthalmologist suspects “wet” AMD, a fluorescein angiogram (FA) or indocyanine green (ICG) angiogram may be completed. Either of these studies involves intravenous injection, and in some cases, oral administration, of the respective dye with subsequent photography of the retina. These are extraordinarily safe procedures, which are completed in the office. The photographs are subsequently reviewed by the ophthalmologist for signs of “leaky” or bleeding vessels beneath the macula indicative of a CNVM. If a CNVM is confirmed, the patient is said to have “wet” AMD.

There is no cure for dry AMD. Dry AMD can become a wet AMD. Daily self eye examination with amsler grid is advised. On observing any small change in vision an eye specialist should be consulted. To retard decrease the progression of the disease high dose of vitamin and mineral supplements may be prescribed.

It is treated to destroy the new blood vessels and prevent their further growth. Treatment may involve:

Laser surgery (Laser Photocoagulation): It can be only done if the person meets certain criteria for laser surgery; very few people qualify the same. Laser or photocoagulation is used to destroy the newly formed blood vessels. It is done as an outpatient procedure. The eye is numbed and the beam of laser is applied to the eye. The laser burns the exposed blood vessels. After laser surgery the exposed area heals and leaves the scar tissue which prevents the further growth of the blood vessels. But the scar tissue on the retina becomes the blind spot on the retina with no vision in area below the spot. Thus if blood vessels occur in the centre of retina responsible for central detailed vision which is required for reading, driving and recognising faces laser is not used for treatment. In ninety percent of the wet AMD the abnormal growth of the blood vessels occur below the centre of retina (subfoveal). For them other methods of treatment are used. Even after successful laser surgery the new blood vessels may reoccur and may require additional laser surgery.

Photodynamic therapy: It is a most commonly used relatively painless procedure for treatment of classic subfoveal wet AMD where the blood vessels are below the fovea. In this a drug is given as an injection in the vein of the arm. It reaches the abnormal blood vessels through the blood stream. This drug is inactive and is activated by exposing the abnormal blood vessels in the eye to laser. The activated drug thus specifically destroys only the abnormal blood vessels. Laser does not affect the overlying cells of the retina as is a very low energy laser. Photodynamic therapy is usually continued for two to three years it being given once every three months. Each session generally takes 20 minutes. Patients treated with photodynamic therapy have to avoid exposure of eyes and even skin to bright indoor lights or sun for around five days as the drug is cytotoxic and gets activated on exposure to bright light.

Implantable Miniature Telescope: It is the treatment for advanced stage wet AMD. Through surgery a small telescope is implanted in one of the eyes to get back the central vision by focussing the light rays from the centre of the eye to the healthy peripheral area. The other eye provides the peripheral vision. Patients have to do a rehabilitation programme to be able to use the device for day to day activities after the surgery.

Discuss the advantages and side effects of each of the treatment procedures with your doctor before opting for one.

UV Protection likely plays an important role in prophylaxis against AMD. Beginning at a young age, it is important to begin protecting the eyes from UV light. Look for sunglasses that afford 100% UV protection or prescription eyewear with the same. Realise that eyewear need not be dark to protect one’s eyes from UV light. In fact, 100% UV protection can be present in spectacles with virtually clear lenses. Also, consider wearing a brimmed hat to shade the eyes while outdoors.

Nutrition most certainly plays a role in AMD as well. Research suggests that individuals whose diets are rich in leafy green vegetables have less risk of AMD. This is thought to be secondary to the intake of a group of carotenoids (colorful pigments) found in high concentrations in certain leafy green vegetables. These pigments are also present in significant concentrations in the macula itself. These carotenoids, known as lutein and zeaxanthin, are antioxidants, which likely play a role in neutralising free radicals (charged molecules), produced in the highly metabolically active macula. A recent study sponsored by the National Institutes of Health found that individuals who had the highest consumption of vegetables rich in carotenoids, especially lutein and zeaxanthin, had a 43% lower risk of developing AMD than those who ate these foods the least. Vegetables that are rich in these two carotenoids would include raw spinach, kale, and collard greens.

Nutritional supplements may be beneficial for those people unable to get adequate intake of fruits and vegetables. However, studies are presently unclear as to whether one can achieve the same protection from supplements containing carotenoids that is achieved with consumption of vegetables themselves.

Smoking is a powerful risk factor for loss of vision with AMD. In fact, one study showed that smoking more than doubles the risk of AMD. This study also found that AMD is more than twice as common in people who smoke more than a pack of cigarettes a day, compared with people who do not smoke. Furthermore, the risk remains high even 15 years after quitting. The advice from ophthalmologists, therefore, is to quit smoking if you desire to retain the best possible vision, regardless of your age.

High Blood Pressure must also be controlled, as this is another risk factor for loss of vision with AMD. Patients should seek and follow the advice of their primary care doctors if they have hypertension. Furthermore, patients should limit saturated fats in the diet and keep alcohol consumption to a minimum.

What Supplements Should One Take to Prevent AMD Progression?

Given the findings of these studies, most ophthalmologists have begun to recommend that patients with AMD include an abundance of leafy green vegetables in their diet. Bausch and Lomb, the maker of Ocuvite®, produces supplements specific for patients with macular degeneration, including Ocuvite Extra®, and Ocuvite® Lutein. These products are found in retail stores and pharmacies everywhere. Macular Protect Complete® from Science Based Health, Alcon laboratories ICaps™, and other supplements also contain antioxidant vitamins and zinc in dosages supported by the AREDS study group, along with various doses of other vitamins and minerals, which are beyond the scope of this article.

It is clear from the studies to date that a diet rich in dark, leafy green vegetables will help to decrease an individual’s risk of developing age-related macular degeneration (AMD). It would be wise to include a serving or two of raw spinach, kale, or collard greens in your diet every day to help prevent macular degeneration and/or to help delay progression of the disease once it has begun.

If an intermediate degree of AMD has already developed, or an advanced degree of AMD has developed in one eye, studies clearly indicate that dietary supplementation with vitamins E and C, beta-carotene, zinc and copper, in the doses previously mentioned, will help to delay progression of the disease. These antioxidant vitamins are readily available in a number of over-the-counter products including Ocuvite®, ICaps™, and many others.

AMD may not be an entirely preventable disease; however, it is certainly prudent for all of us to minimize our risk. How do we do this? Don’t smoke. Be sure your blood pressure is controlled. Consume plenty of dark, leafy green vegetables and consume the recommended antioxidant vitamins and zinc. Finally, if you’re over 65 or you’ve already been diagnosed with AMD, see your EyeMD (ophthalmologist) at least once a year or per his or her recommendations.