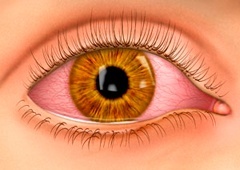 ConjunctivitisBacterial conjunctivitis typically presents with a red eye(s), purulent (pus) discharge, a gritty sensation, and occasionally sticking shut of the eyelids in the morning. Vision is not affected. Most conditions in the adult are secondary to staphylococcus (staph) or streptococcus (strep) infections. If the discharge is severe, gonococcal (gonorrhea) conjunctivitis must be considered. In children, the bacteria known as Hemophilus influenza may be causative. This bacterial infection is not related to the common flu, which is viral in nature. Newborn infants with conjunctivitis must be evaluated for gonococcal and chlamydia conjunctivitis (sexually transmitted diseases), however, staphylococcus, streptococcus, and other infectious agents must be considered as well.

In most cases of adult or childhood conjunctivitis, treatment with topical antibiotics is initiated without cultures. If the ophthalmologist elects for cultures, antibiotic therapy is usually initiated and treatment changed later, as necessary, depending on culture results. Gonococcal conjunctivitis requires intravenous or intramuscular antibiotics in addition to topical therapy.

Viral conjunctivitis is usually secondary to the adenovirus. In many cases, onset follows an upper respiratory infection such as the common cold. A history of close contact with a family member or any other individual with a “red eye” is also commonly elicited. The affected patient usually presents with redness of one or both eyes, watery or scant mucus discharge, and generally good vision.

The ophthalmologist may find conjunctival signs of viral infection known as follicles and an enlarged pre-auricular node (located in front of the ear). In some cases, the cornea of the affected eye will develop immune-related opacities known as subepithelial infiltrates. These may affect vision and can take several months to resolve. Most cases of viral conjunctivitis will run their course in about three weeks.

Treatment is usually limited to symptomatic therapy, much as one would treat the common cold. Vasoconstrictor and antihistamine combinations in eye-drop form may be very helpful in relieving symptoms. In cases in which subepithelial infiltrates develop and affect vision, steroids may sometimes be recommended to control symptoms and speed recovery. However, it is quite possible that once the steroids are discontinued, the disease may continue to run its course. Furthermore, long-term steroid use may be associated with development of cataracts or glaucoma.

Allergic Conjunctivitis nearly always presents with a primary complaint of itching. A stringy but scant mucus discharge, red eyes, and other allergic symptoms such as rhinitis (stuffy, runny nose), “scratchy” throat, and dry, hacking cough are commonly present. Vision is rarely affected. The diagnosis is confirmed by the lack of infectious signs on slit-lamp (microscopic) examination in the office.

Treatment is aimed at symptomatic control, which in many cases may be chronic. Depending on the degree of symptoms, many patients can be controlled with over-the-counter vasoconstrictor and antihistamine eye-drop combinations. If this is ineffective, or the symptoms are more severe, a mild steroid eye-drop medication may be utilized temporarily, with eventual substitution of a mast-cell stabilizer eye-drop medication. Mast cells are the cells responsible for release of histamine and other mediators of inflammation and, ultimately, are responsible for itching. Patients, whose symptoms can only be controlled with steroids, and require the medication chronically, must be monitored for potential increases in eye pressure and cataract development.